Updated: Impact of the Budget on Public Education

The General Assembly will reconvene on July 13, 2015. At that time, a committee comprised of members of the House and Senate will work on a biennial budget that will ultimately be passed by a majority in each chamber. Because this did not occur before the last day of the fiscal year, the House and Senate passed 2015 Continuing Budget Authority, “an act authorizing the director of the budget to continue expenditures for the operation of government at the level in effect on June 30, 2015.” The continuation budget provides additional funds to accommodate the expected growth in public school student enrollment, but keeps all other education expenditures flat. The continuation budget remains in effect through August 14, 2015, at 11:59 PM.

On August 12, 2015, Senate Bill 560 was ratified.
The bill authorizes the Director of the Budget to continue expenditures for the operation of government at the level in effect on June 30, 2015, until August 31, 2015.

On August 18, 2015, the Governor and General Assembly leaders agreed on a total spending amount for the 2015-17 budget. That amount, $21.735 billion, is a 3.1 percent increase over the current budget, $415 million less than the House proposed budget and $265 million more than the Senate proposed budget.

The passage of the 2013-15 state budget dealt a powerful and immediate blow to North Carolina’s public schools. While North Carolina’s student population has grown by 43,739 students since 2008-09, funding has remained flat.

**According to the NC Department of Public Instruction, “Total funding for public schools increased $60,214,282 since FY 2008-09; but, if you back out the funding added for benefit cost increases and salary adjustments, the funding available for classroom activities (textbooks, transportation, teacher assistants, teachers, etc.) has been reduced by over $1 billion.”

***These figures represent ADM, or average daily membership. In addition, the budget:

Another significant change in K-12 education funding was passed in the 2014 legislative session. Historically, school districts were provided with “planning allotments” at the beginning of the school year that accounted for a district’s in average daily membership (ADM). A new budget provision eliminates these up-front dollars used to fund additional staff and other resources needed to accommodate student population growth. School districts that do not have a fund balance (“rainy day” account) will be forced to make cuts to their current operating budget to cover costs. Moreover, school districts will not know until the following fiscal year whether their enrollment growth will actually be funded.  Read more. 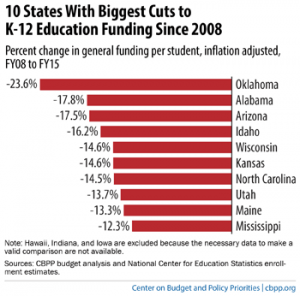 The Center on Budget and Policy Priorities October 2014 report, “Most States Funding Schools Less Than Before the Recession” shows that North Carolina ranks 7 among 14 states in which 2014-15 per-pupil funding is more than 10 percent lower than in 2008 when the recession hit. Adjusted for inflation, North Carolina is spending $855 less per student this year than in 2008.

“States are providing less per-pupil funding for kindergarten through 12th grade than they did seven years ago — often far less. The reduced levels reflect primarily the lingering effects of the 2007-09 recession. At a time when states and the nation need workers with the skills to master new technologies and adapt to the complexities of a global economy, this decline in state educational investment is cause for concern.”

Tweet
Uncategorized
Video: With Doors Open for All
Become an Education Champion! 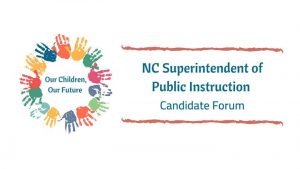 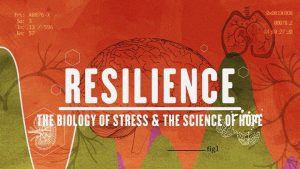 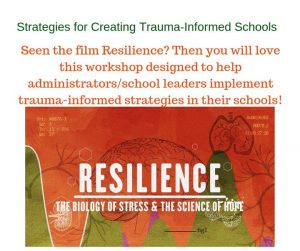