Poverty and Segregation in NC Schools 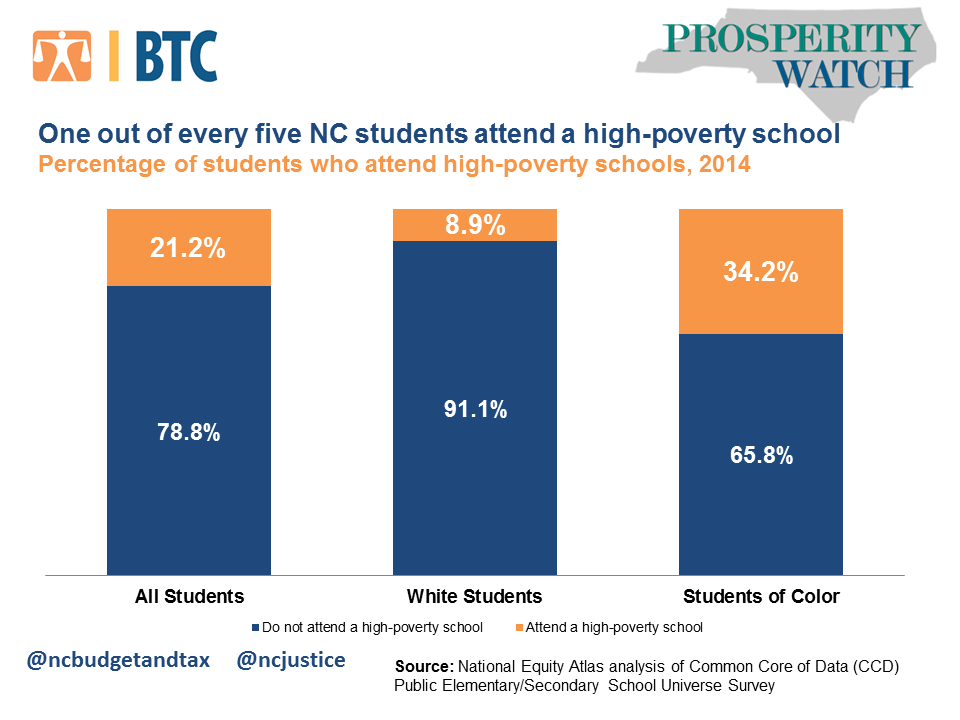 The NC Budget & Tax Center has a crucial report on the percentage of our students attending high-poverty schools. While the figure is more than 20% overall, it is much higher for students of color.

The authors clarify this trend:

The concentration of low-income students in high-poverty schools cannot simply be explained as a rise in poverty. Over the past decade, North Carolina has seen only a modest increase in the number of students who are eligible to receive free or reduced lunch. Prior to the beginning of the recession, just over 48 percent of students applied for the free or reduced lunch program in the 2007-08 school year. That number peaked at 58 percent in 2013 school year and has since decreased to 53 percent this past year.  In the same time period, the percentage of students enrolled in high-poverty schools has nearly doubled.

High-poverty schools are much more likely to receive “failing grades” from the state. Those grades may now be used to justify the state takeover of schools for inclusion in the Innovative School District. Communities that lose a school to the ISD are effectively cut off from their locally elected school boards, and “concentrated high-poverty schools are often the result of economic and racial segregation.”  It is clear from the graph above who is most at risk for this kind of disenfranchisement.

Students in high poverty schools are also more likely to underperform than their peers in better financed schools. As the report notes, “The gap in student achievement between low- and high-income students has grown. A large part of this expanding achievement gap is explained by the increasing segregation of schools.” North Carolina must re-commit to our strong system of equitable, free public schools and to ameliorating poverty in all of our communities. This is crucial to the future of both our economy and our democracy.