For more than a decade, NC has been experiencing a shrinking teacher pipeline and a teacher shortage. The teacher pipeline refers to the interconnected system that extends from recruiting individuals into the profession, developing them as teachers, and retaining them through retirement. To have a robust teacher pipeline, teaching in NC needs to be an attractive profession for people to enter and stay in throughout their careers.

An indicator of the problem is the decreased number of students majoring in education in the 16 UNC system universities. According to data collected from the UNC System Interactive Data Dashboard, the UNC system, which produces the majority of new teachers in NC each year, experienced a 35% enrollment decline between 2012 and 2021. 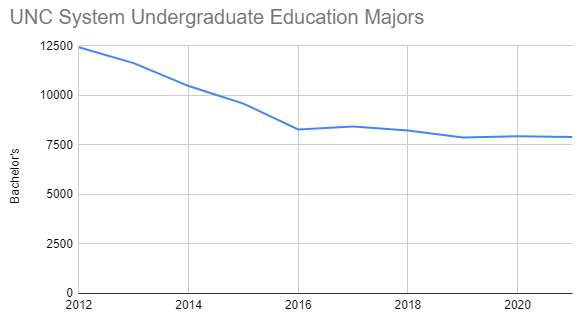 These enrollment trends are devastating to a profession seeing to increase the diversity of its members to better reflect student diversity. According to data from NCDPI, more than 50% of the student population is made up of students of color, but nearly 80% of teachers are white.

Income potential and growth are common metrics used by people deciding which profession to pursue. To increase teacher recruitment, NC needs to improve on both metrics. Currently, the average starting salary for teachers (including local district supplements) is $37,049, putting NC last among its neighboring states and #43 lowest in the nation for starting salaries according to data from the National Education Association.

Beyond starting salary, what salary advances can NC teachers expect? Not many. In fact, between years 15 and 24 there are ZERO increases. This is another area where NC should make dramatic changes to improve its teacher pipeline. Currently, the top salary on the NC salary schedule is $52,680, which a teacher can reach after 25 years.

If teachers have National Board Certification, their top salary increases to $59,000. Approximately 23% of NC’s teachers have obtained National Board Certification, which helped bring the NC average teaching salary to $54,150 in the 2019-20 school year. According to the NEA, this puts NC’s average salary at #33 in the nation. Yet the growth in average teacher salaries in NC was the lowest in the nation, less than 1% between 2018-19 and 2019-20. In contrast, in the same timeframe, New Mexico increased their teacher salaries by a whopping 13.44% and jumped from #49 lowest average salary in the nation to #32, just above NC.

In looking at career growth, in addition to keeping teacher salaries at shamefully low levels, the NC General Assembly has severely handicapped recruitment potential in other ways. In 2013, it eliminated supplemental pay for advanced degrees. This action cut off an important avenue for teachers to increase their pay through advanced degrees and also signaled a disregard for the value of advanced professional degrees. Reversing this decision is an important step in fixing NC’s weakened pipeline.

The NCGA also eliminated teachers’ career status and shifted all teachers to one-year contracts. In 2016 the NC Supreme Court ruled that teachers who had career status prior to 2013 could retain it. Many districts now provide multi-year contracts to provide employment stability for their teachers.

North Carolina has taken some steps to stop the negative trend. In 2017, the NCGA brought back a limited version of the nationally acclaimed NC Teaching Fellows Program (cut in 2011). But the new version includes fewer than half the participating teaching education programs from the original version and includes only STEM and special education specialty areas.

Launched in 2021, the Uniform Articulation Agreement allows students in teacher education/educator preparation programs to apply all of their transfer credits from 52 participating North Carolina community colleges to a 4-year university within the UNC system. Individual districts are trying to address shortages by creating their own recruitment programs such as Wake County’s Future Teacher’s Program, which started in 2022.

Add a pandemic plus focused attacks on public education/teachers by politicians and parent groups to already challenging conditions and NC has a teacher pipeline crisis in need of an immediate fix.

Read more about the NC teacher pipeline and NC teacher salaries in our fact sheets and join our webinar (see below).