The Facts on Charter Schools

Click here for a printable version of this page.

Most Recent Facts on Charter Schools

State funding has increased from about $16.5 million in 1997, when there were 34 schools, to more than $734 million for the 2019-2020 school year. About 7 percent of the state’s education funding is currently allocated to charter schools. 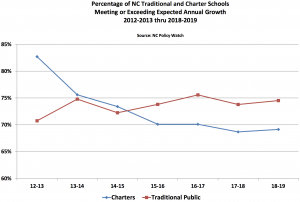 In addition to disappointing academic performance, and siphoning money away from traditional public schools, charters maintain and often exacerbate segregated schools. A recent national analysis shows that while only 4 percent of traditional public schools have student bodies that are 99 percent minority (2014-15), 17 percent of charter schools are 99 percent minority. In his report, Stymied by Segregation Kris Nordstrom reports: “In 72 percent of North Carolina counties with at least one charter school, charter schools increase the degree of racial segregation in the district, as measured by the racial dissimilarity index.”

SB 247, Charter School Study/Moratorium on Growth, was introduced in March 2019. This bill would establish the Joint Legislative Study Committee to study the impact of charter schools on local school administrative units and place a moratorium on charter school growth pending further legislation. Charter schools drain valuable resources from our traditional public schools. Many systems are rapidly resegregating and we need to study the effects of charter schools to ensure we are being good stewards of taxpayer money. Charter schools should have the same accountability as traditional public schools so that all our students receive a high-quality, equitable education.  This bill did not move forward, disappointingly, in the recent legislative long session.

One of the most concerning bills to come out of the 2018 legislative session was HB 514. HB514 titled Permit Municipal Charter School/Certain Towns allows Cornelius, Huntersville, Matthews, and Mint Hill, majority white suburbs of Charlotte, to create their own charter schools. Further, they will be permitted to restrict access to local residents. In the budget amendments, a related provision (38.8) allows local municipalities to use (and raise) property taxes to fund schools. It is worrisome that this will exacerbate existing segregation and inequality. Charlotte is already experiencing high levels of segregation. Additionally, taxpayers could see increases in tax bills as localities take on school funding responsibilities.

Many public school advocates think these related pieces of legislation will eventually be found unconstitutional. Also troubling is how this legislation could return North Carolina to a time when the quality of education was inequitably distributed based on zip code. On June 6, 2018, the N.C. House approved HB 514 with a 64-53 vote. It was ordered enrolled and ratified (Ch. SL 2018-3). Public school advocates have serious concerns about segregation and inequity. It was treated as a local law and therefore did not require the governor’s signature.

Section 38.8 of the 2018-2019 Budget Adjustments bill authorized cities in North Carolina to use local property taxes to fund any public school located within their localities. This could include charters, lab schools, and any other publicly funded entity.

HB514 furthers the divide between have and have not schools by allowing cities to supplement funds for certain schools. Previous budget adjustments also granted the virtual charter schools pilot an extension for another 4 years even though both virtual schools are low-performing.

What are the concerns about Charter Schools?

For these reasons, many education experts advocate that the state only allow a limited number of truly innovative, not-for-profit charter schools designed to work with local school districts and be managed with careful local and state oversight. There is a growing call for giving traditional schools the same privileges and flexibilities as the charter schools to enhance choice and program offerings to accommodate academic needs of our children. This would allow innovative, creative and flexible learning opportunities along with the transparency, accountability and stability that parents, teachers, students and taxpayers desire while keeping one public system of public schooling in NC.

Sources: Please see our website for more research, citations and information on this topic.