The most current budget included the creation of fast track replication process for some charter schools. Planning year will not be required for these schools.

North Carolina currently has 204 charter schools serving over 126,000 students and ten schools participating in the planning year and scheduled to open in 2022. Approximately 8.4 percent of North Carolina’s 1.5 million school children attend charter schools. In the most recent budget, $10.37 billion was spent on public education with $734.7 million allotted for charter schools. Since 1998, 48 charter schools have voluntarily relinquished their charters, one has been assumed by another non-profit board, 10 have been non-renewed, and 17 charters have been revoked by the State Board of Education. During the 2018-19 school year, 47 charter schools were identified as either low-performing or continually low-performing. Of the charter schools in operation, 80 provide reduced-priced lunches and 108 provide bus transportation. In contrast, all traditional public schools provide reduced-price lunches and offer bus transportation. 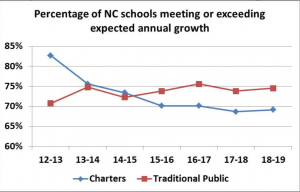 Source: NC Policy Watch, September 2019
In addition to disappointing academic performance, and siphoning money away from traditional public schools, charters maintain and often exacerbate segregated schools. A recent national analysis shows that while only 4 percent of traditional public schools have student bodies that are 99 percent minority (2014-15), 17 percent of charter schools are 99 percent minority. In his report, Stymied by Segregation Kris Nordstrom reports: “In 72 percent of North Carolina counties with at least one charter school, charter schools increase the degree of racial segregation in the district, as measured by the racial dissimilarity index.”

Cap Lifted: In August 2011, NC Senate Bill 8 was approved, removing all limits on the number and enrollment increases of charter schools allowed, lowering minimum enrollment numbers, and eliminating provisions that guard against schools being created to serve only specific subcategories of students (e.g. gifted students, students with disabilities, students of the same gender).

When the cap on the maximum number of charter schools allowed (100) was lifted in 2012, there were 45,000 students enrolled in charter schools. Currently, 184 charter schools, including two online/virtual charters, operate in NC, serving approximately 110,000 children. Charter school students make up nearly 7.3% of the total student population for grades K-12.

The deadline to submit an application to the Office of Charter Schools for the 2020-21 school year was October 1, 2018. Thirty-Five applications were received for the 2020-21 school year and are under review. A listing of applicants is available on the NC Department of Public Instruction’s website (look for Office of Charter Schools).

For more details see Historical Overview of Charter Schools and see the Charter Schools Annual Report presented by the NC Department of Public Instruction in February, 2019.

SB 247, Charter School Study/Moratorium on Growth, was introduced in March 2019. It was referred to the Committee On Rules and Operations of the Senate in March and has not had further action this session. This bill would establish the Joint Legislative Study Committee to study the impact of charter schools on local school administrative units and place a moratorium on charter school growth pending further legislation. Charter schools drain valuable resources from our traditional public schools. Many systems are rapidly resegregating and we need to study the effects of charter schools to ensure we are being good stewards of taxpayer money. Charter schools should have the same accountability as traditional public schools so that all our students receive a high-quality, equitable education.

One of the most concerning bills to come out of the 2018 legislative session is HB514 titled Permit Municipal Charter School/Certain Towns allows Cornelius, Huntersville, Matthews, and Mint Hill, majority white suburbs of Charlotte, to create their own charter schools. Further, they will be permitted to restrict access to local residents. In the budget amendments, a related provision (38.8) allows local municipalities to use (and raise) property taxes to fund schools. It is worrisome that this will exacerbate existing segregation and inequality. Charlotte is already experiencing high levels of segregation.

Additionally, taxpayers could see increases in tax bills as localities take on school funding responsibilities. Many public school advocates think these related pieces of legislation will eventually be found unconstitutional. Also troubling is how this legislation could return North Carolina to a time when the quality of education was inequitably distributed based on zip code. On June 6, 2018, the N.C. House approved HB 514 with a 64-53 vote. It was ordered enrolled and ratified (Ch. SL 2018-3). Public school advocates have serious concerns about segregation and inequity. It was treated as a local law and therefore did not require the governor’s signature.

Section 38.8 of the 2018-2019 Budget Adjustments bill authorizes cities in North Carolina to use local property taxes to fund any public school located within their localities. This could include charters, lab schools, and any other publicly funded entity.

HB514 will drastically alter the way schools could be funded. It could further the divide between have and have not schools by allowing cities to supplement funds for certain schools. The budget adjustments also grant the virtual charter schools pilot an extension for another 4 years even though both virtual schools are low-performing. (All related legislation can be found on the NC Department of Public Instruction, Office of Charter Schools’ website.)

Public school advocates believe that there should be a limited number of truly innovative, not-for-profit charter schools designed to work with local school districts and managed with careful local and state oversight. However, the passage of a 2011 law removed all limits on the number and enrollment increases of charter schools, which has encouraged the rapid growth of these schools. [Note: In addition to traditional “brick and mortar” charter schools, online or virtual charter schools offer full-time learning—in front of a computer—not necessarily in a space dedicated to learning, or with any adult supervision. Please read our perspective on online charter schools.

How do charter schools differ from traditional public schools? 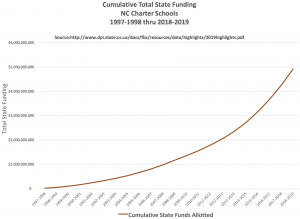 Lack of oversight: The State Board of Education lacks adequate staff and a sufficiently rigorous process for evaluating applications and tracking charter success.

Uncertain legal protection for students: Students of color are suspended at two to three times the rate of other students. Black students, boys, and students with disabilities were disproportionately disciplined compared to other groups.

For these reasons, many education experts advocate that the state only allow a limited number of truly innovative, not-for-profit charter schools designed to work with local school districts and be managed with careful local and state oversight. There is growing call for giving traditional schools the same privileges and flexibilities as the charter schools to enhance choice and program offerings to accommodate academic needs of our children. This would allow innovative, creative and flexible learning opportunities along with the transparency, accountability and stability that parents, teachers, students and taxpayers desire while keeping one public system of public schooling in NC.

Many education experts advocate for only allowing a limited number of truly innovative, not-for-profit charter schools designed to work with local school districts and be managed with careful local and state oversight. There is a growing call for giving traditional schools the same privileges and flexibilities as charters to enhance choice and program offerings to accommodate academic needs of our children. This would allow innovative, creative, and flexible learning opportunities in traditional public schools along with the transparency, accountability and stability that parents, teachers, students and taxpayers desire while keeping one strong public system of schools in NC.

What is needed to help charters be successful?

Ultimately, charter schools are public schools and should reflect public school demographics, barring policies and practices that may prohibit students from attending them. They should be open to all in the state and offer free and reduced lunch, safe and reliable transportation, and services for students with disabilities, limited English proficient students, and academically gifted students.

Recently, the Annenberg Institute for School Reform published a series of standards and policy recommendations for the effective oversight of charter schools; in making our own recommendations and considering those of the Annenberg Institute, if the charter school system is to have a purpose in North Carolina, its constant improvement is vital to ensure the highest quality of education in the state.

NATIONAL CENTER for ANALYSIS of LONGITUDINAL DATA in EDUCATION RESEARCH, 2015, The Growing Segmentation of the Charter School Sector in North Carolina

2018 report from UCLA shows charter schools as a major contributor to resegregation.

National Center for Analysis of Longitudinal Data in Education Research, The Growing Segmentation of the Charter School Sector in North Carolina, http://www.caldercenter.org/publications/growing-segmentation-charter-school-sector-north-carolina

Also see In the Public Interest and the Center for Popular Democracy’s The Charter School Accountability Agenda: An 11-Point Program for Reform

State Board of Education, Office of Charter Schools Website: http://www.ncpublicschools.org/charterschools/

G.S. 115C-238.29F (g) “A charter school shall not discriminate against any student on the basis of ethnicity, national origin, gender, or disability. Except as otherwise provided by law or the mission of the school as set out in the charter, the school shall not limit admission to students on the basis of intellectual ability, measures of achievement or aptitude, athletic ability, disability, race, creed, gender, national origin, religion, or ancestry.” http://www.ncga.state.nc.us/EnactedLegislation/Statutes/HTML/BySection/Chapter_115C/GS_115C-238.29F.html

A federal appellate court decision suggests that students of color should also be concerned about the legal protections that charter schools might provide to students.” See Green, P., Frankenberg, E., Nelson, S., & Rowland, J. (2012). Charter schools, students of color and the state action doctrine: Are the rights of students of color sufficiently protected? Washington and Lee Journal of Civil Rights and Social Justice, 18(2), 254-275. http://cloakinginequity.com/2013/01/02/why-judges-say-charters-are-not-public-schools-students-and-parents-should-be-nervous/